In a television interview last month, I compared the state of blockchain adoption to a 4-stage relay race, saying we’re at stage 3 where the baton is being passed from anarchist-early adopters onto enterprisers. In a subsequent follow-up interview on February 8th, I said the portal to mass scale consumer adoption in the U.S. would be thru the banks, given their large existing footprint into 94% of U.S. households. I also put a time frame on it of 2 years, which at that moment may have seemed ambitious. If anything, the announcement from JPMorgan the following week about launching its own coin, may already render that outlook conservative! This leads directly into the final point I wish to make at this time regarding the odds and pace of mass scale blockchain consumer adoption.

If an outlook, forecast or “bet” (for lack of a better word) comes down to technologists solving for scale ... I say take it, take it every time … they always come thru for us, and often exceed their own expectations.

In the February interview, I also said the largest hurdle to enterprise blockchain adoption at this stage is scale; expressed as transactions per second (tx/s) the enterprise payment processing standards Visa and Mastercard routinely process 2,000 tx/s and exceed 50,000 tx/s during holiday peak seasons, versus a paltry-looking 7 tx/s for the current Bitcoin and Ethereum networks. However large that gap may seem, there are already distributed ledger projects approaching those levels and beyond, with many competing approaches and efforts in the works. More generally, we should all derive confidence from technologists on this point - if there’s anything we can count on them getting right it’s scale:
•    They did it with storage where one can now rent a whopping 2 terabytes in the cloud for about $10/month (depending on provider);
•    They’re doing it with 5G bandwidth which is “100 times faster than the previous cellular technology, 4G LTE” to address the so-called “last mile” problem;
•    And perhaps the most famous scaling achievement thus far is computing power; largely attributed to former Intel CEO Gordon Moore and thus known as "Moore's Law", it is a forecast originated in the 1960's which stated that integrated circuit silicon chip productivity would double about every 18 months. Initially projected to hit a ceiling in the mid-1970’s, this productivity increase has only begun to observably slow recently (although some would argue the data coming in is still too early to officially declare the law expired). 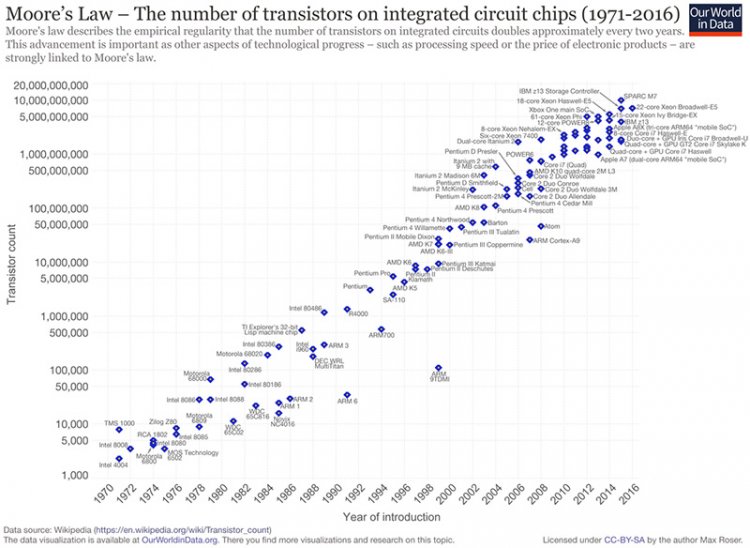 In any case, the technologists exceeded their own expectations by at least 4 decades!

“The existing Visa credit card network processes about 15 million Internet purchases per day worldwide. Bitcoin can ... scale much larger ... for a fraction of the cost. It never really hits a scale ceiling.” Satoshi Nakamoto, April 2009

Back to blockchains, the beauty of the current race to scale for mass consumer adoption is that we don’t need to predict some intricate trifecta or even which "horse" will cross the finish line first, we just need at least one of them to do it. 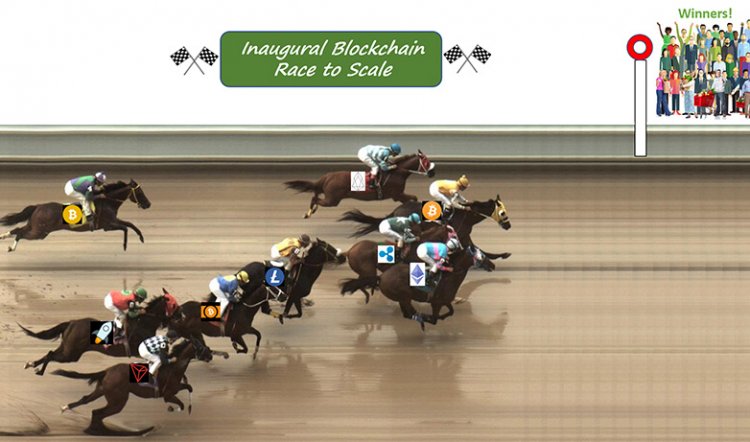 With regard to scale and the protocol described in the Bitcoin whitepaper, Satoshi Nakamoto had this to say: “The existing Visa credit card network processes about 15 million Internet purchases per day worldwide. Bitcoin can ... scale much larger ... for a fraction of the cost. It never really hits a scale ceiling” [full quote here]. On the outlook of future metrics, the pseudonymous character also asserted: “I'm sure that in 20 years there will either be very large transaction volume or no volume.” Halfway thru the experiment and with the Bitcoin network alone managing in excess of 300,000 transactions per day (at the time of this writing), I think it’s safe to say we’re past the “no volume” threshold, and well on our way to “very large transaction volume.”

In a nutshell, if an outlook, forecast or “bet” (for lack of a better word) comes down to technologists solving for scale (once identified as the key constraint) I say take it, take it every time … they always come thru for us, and often exceed their own expectations.